Parts of our nation have been shut down for months. Most states have face mask mandates, and large gatherings are frowned upon. It’s easy to see how the current climate might have a negative impact on the biggest motorcycle rally of the year, but Sturgis 2020 started with a bang. Here’s what’s happening so far. 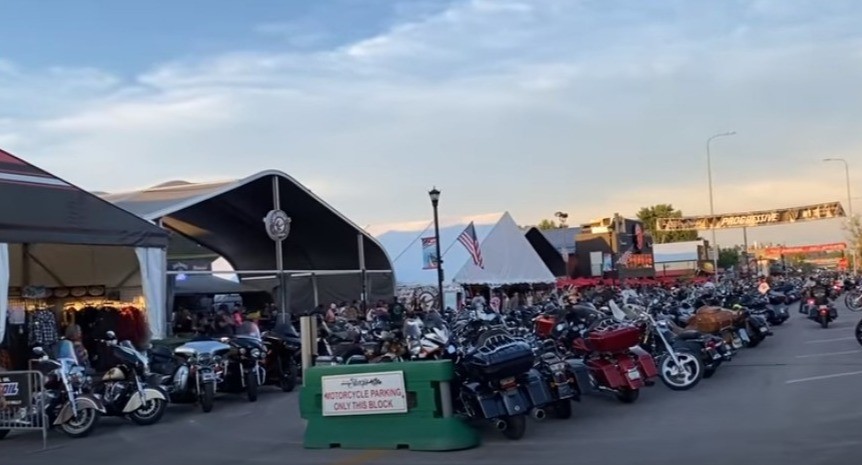 Every year, on the first Friday in August, thousands of motorcyclists descend on Sturgis South Dakota for the biggest motorcycle rally, well, anywhere. It’s been going on since 1938 when a group got together for stunts and races. Attendance has been as high as over 700,000, and the event generates around $800 million in annual revenue for the state.

This year, it kicked off last Friday, August 7, and runs through Saturday, August 15. Events include drag races, the Mayor’s charity poker tournament, a photographic war memorial, and others. The long list of concerts includes performers like the following:

It’s a spectacle every year. Part of the fun is the journey there and back. You can read the experience of one of our own in Vicki’s Ride to Sturgis from last year.

An annual motorcycle rally that draws hundreds of thousands is sure to raise eyebrows at any time of year, but as you can imagine, this year there was additional controversy.

There are only around 7,000 year-round residents in Sturgis, and when the pandemic started to impact lives across America, city leaders took a poll to see what they thought about this year’s rally. They invited local health officials, business owners, residents, and experts to weigh in, and over 60 percent of respondents said they’d rather skip the rally this year over health concerns.

Council leaders decided to have the rally anyway.

A spokesperson said Americans had been locked up for months, and that they were most likely coming anyway. Officials focused on being able to handle the traffic and on increasing efforts to sanitize and protect.

They canceled planned advertising, hoping fewer would come, and emphasized long rides through surrounding areas during the event, since motorcycle riding is the ultimate social distancing activity.

Still, concern exists, because rally attendees are coming from all over the nation, possibly from areas with a higher concentration of COVID cases per capita.

As strange as it seems to us in Texas, South Dakota never closed. The state’s total coronavirus cases are low. They haven’t ever gone above recommended infection percentages, so it’s still acceptable to have large gatherings.

They’re encouraged, but no face masks are required at Sturgis this year. After-hours gatherings and outdoor concerts don’t have capacity limits. When you walk down Main Street, you see a handful of participants in masks, but many more without.

The Sturgis hospital system added 172 “COVID beds” before the rally started, and has 1,300 tests on hand to offer people who don’t have symptoms after the rally but want to make sure they’re not asymptomatic carriers. They’ve also added sanitation stations and are encouraging social distancing everywhere possible.

An infectious disease professor at Emory University said the rally itself isn’t really a danger, because most of it happens outside. If there is spread, it will be from restaurants, bars, and places of high concentration.

Screw COVID I Went to Sturgis

That’s the T-shirt slogan you’ll see hanging at multiple vendors. Experts say there might be as many as 250,000 in attendance. The steady stream of attendees started Friday and has swelled to a large crowd. The consensus is that people who ride take risks every time they get on a motorcycle and enjoying life is part of riding free.

How to See What’s Happening

The City of Sturgis has several livecams that show you the action as it occurs. While the news outlets sound like hordes of germ-infested heathens are filling the streets, "with little regard for the public health emergency ravaging the world," what footage shows looks pretty restrained. Traffic appears light, and there's plenty of room in typically congested areas for social distancing. Check it out for yourself.