Black Gold Harley-Davidson's® Business Development Center Coordinator Vickie Cashon is living her best life. Right this moment she's on her way to Sturgis 2019 for an epic 10 days and nights of riding, food and music. We'll post photos and updates as she sends them.

The first leg of the trip was pretty much uneventful until the West Texas heat got to 1,000 degrees. We had to pull over and slam some Gatorade and water.

We were hydrating all day, but it was just hot. The wind and sun really drained us.

Finally, I bought a bag of ice and just threw it over my lap to cool my core and off we went. I was wet with cold, melted ice, but before long all the ice was gone. I was completely dried out by the time we got to our hotel.

We left Childress early, before the sun came up, and I was glad we did. Everyone always says how boring the ride is from Wichita Falls to Amarillo, but I totally disagree!

Farmers were using tractors to move massive water sprinklers. Crop dusters were bobbing and weaving in the air all around us. Iron grasshoppers were pumping black gold, huge windmills were churning air into electrical magic and the atmosphere was pulsating with life. I felt included in their activities, even though my job was just to roll through.

We got a little shower before Pueblo, then a huge one after coming through the mountains just before Colorado Springs. We stopped by Pike's Peak Harley-Davidson® wet to the bone. After that, we got some dinner and came to our hotel to meet up with our older brother. Now there are three of us. 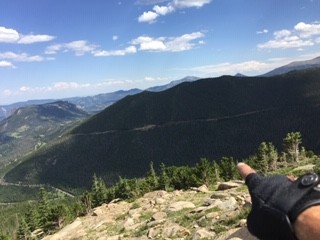 There aren't enough adjectives to describe every moment of this trip. We literally took in some of the most majestic mountain and canyon scenery on the planet and paired it with the rush of riding a Harley® and the thrill that comes with challenging terrain. I'm going to keep using the word amazing, but I mean something so much bigger, so much more intense and precise.

As we were going toward Rocky Mountain National Park, there's a place where you take a left knee, then you come to Estes Park, and it's postcard-perfect. All of the sudden a huge lake fills your view, and there are people with wakeboards, and other people swimming, then this picturesque little town. It's a tiny getaway community, and everything looks so perfect, like viewing a mountain vacation through a lens that sends you back in time when things were simpler and more wholesome. The hotel where they made The Shining is there too, which just adds a little delicious creepiness to the mix. 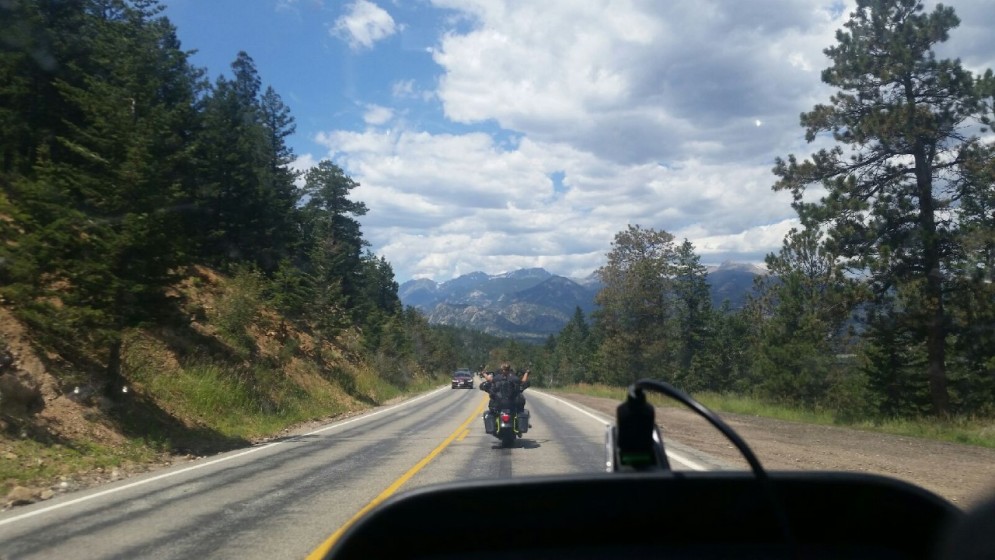 Toward the top of the alpine pass we had lunch at a cafe. We had moutain views all around, we ate fresh caught fish, it wasn't too bad at all. The top of the mountains were snow covered, so we left that morning in regular clothes, but went over the pass wearing big coats and beanies. It was a huge change from riding through Texas just a day earlier.

Then, coming down we saw a river that starts small at the top of the mountain and quickly gets bigger and faster, until it's this powerful surging force with whitecaps. On the bike, you're following alongside it in this exhilirating series of twists and turns, where you can't tell if the river is racing you or rushing companionably along. Then all of the sudden you're at the bottom of the canyon, in the shadow of tall mountains on either side.

We stopped in Cheyenne Wyoming and stayed the night. It's about the size of old McKinney, but it's the state capital. That's so funny because it's this little bitty town.

After that we went to Custer, South Dakota and spent a few days there. We went through Buffalo Chip, Big Rock, Spearfish, Needle's Highway, Central Hills Loop and did a few other rides.

On to Sturgis and One Major Problem 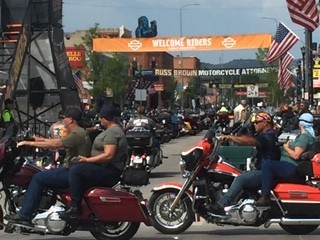 The whole trip was amazing (there it is again), but we especially wanted to get photos and video of Sturgis. I mounted my phone to my bike so I could get the ride in, and it was the first time I had used it for that. On the outskirts the town is pretty small, but you come to where the businesses are concentrated and all the sudden there are people and bikes everywhere. On the way, my phone just fell off my handlebars.

At first there was just a little bitty crack. So I put it back in the holder and really clamped it down. It just smashed and the screen went black. So that's why there's no video of Sturgis.

It might be better that most of what happens in Sturgis stays in Sturgis. It definitely lives up to its reputation. When we rode in, there were thousands of bikes everywhere. Everything you imagine you might see at the biggest motorcycle rally in the U.S. was there in spades. There were people everywhere and a sort of "anything goes" vibe. We saw Rick Fairless from Strokers, which was fun. 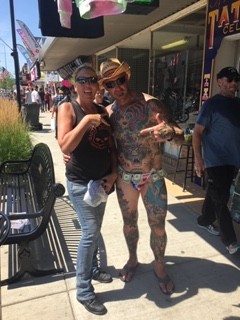 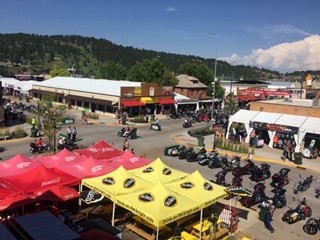 We stayed at the Pappy Hoel campgrounds by Full Throttle Saloon, so of course we stopped by the saloon. We tent camped at Pappy Hoel. Cheap Trick played that night, so we partied with them until around four in the morning, then got up again with the sun. After that we packed up our tents and headed to Red Lodge Montana.

We went from Sturgis through Big Horn National Forest. At Big Horn Pass, at one point we were up so high, about 11,000 feet. As we approached the switchbacks and we were looking down, the Earth below looked blue because we were looking back down through the atmosphere.

From Big Horn we went through Big Prior Mountain to Bear Tooth Pass. Through the switchbacks you see this little village nestled along the river on the right side, and the village follows the switchbacks all the way down. At Red Lodge Montana the hotel is built of wood they cut from the surrounding area. There are these huge, big round trees that all make up parts of the building.

The next day we got up and headed for Yellowstone National Park. If you've never been there, it's otherworldly. We went just everywhere, camping at night. One morning we woke up and there were elk all around us, so close you could almost reach out and pet them. We saw bears and bison.

At one point we rode up on a group of bison. I had point position and this younger one was just staring me down. He wasn't a baby or an adult, more like an adolescent and he was scratching his horn like he was going to come after me. I cranked the throttle to make a noise, and he changed his mind.

After that we went to Angel Falls and Bear Creek. It's so perfect how all the places have animal names like Boar's Tusk, Snake River, Bear Tooth Pass. Bear Tooth Pass is named that because right in the middle you look up and there's this big rock, just like a bear's tooth. The other places take their names from the geography, and it's all so elemental. Then we got to the Tetons.

When you ride through Colorado, you think you've seen mountains. Then you get to the Tetons, and you have to just stop and stare. I don't think you could ever stare long enough to soak in the magnificence, the timelessness of the Grand Tetons. You can't really describe the feeling to someone who hasn't been there. They're blue and snow capped and more enormous than anything you've ever seen. But those words are flat compared to the reality.

After that, since I wanted to complete nine states, we took a short trip through Idaho.

Then we went to Flaming Gorge National Recreation Area. This might have been my favorite part of the trip, but there were so many it's hard to say. It's this huge gorge that's very, very deep, and the colors of the canyon walls are vivid orange, red and yellow. The time of day we rode through, it looked like the walls were on fire, and of course we're blazing through on Harley®s, which just makes everything more saturated and real. I've gotta say it again, it was amazing...

From there, we went through Red Canyon, Dinosaur, all the way to Rifle Colorado. At that point, my brother suggested just catching the Interstate. He was ready to get home, and we agreed. At that point, I expected a boring, uneventful, long highway journey. I didn't expect what came next.

If you go on a similar motorcycle road trip, plan to go through the White River National Forest. I was expecting a highway ride like on I-35 around Dallas, and I'm glad my expectations were way off. We hit the highway at White River National Forest, and the river is huge. It's probably as wide as a football field, and the road is built along the canyon walls. You see the river under you, then it's beside you. You're cruising along the road and it moves with you, so it feels like you're in a raft riding the white rapids, only on a bike.

It rained on us there, so we went slower, and it just made me see more. It was an unexpected, unforgettable, unbeatable experience. 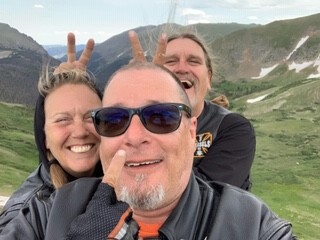 We made it to Pueblo that night, and the next day we went from Pueblo all the way home in around 13 hours. When we hit West Texas we slammed into this wall of heat. I bought a bag of ice and rode down the road with it on my lap, eating the ice and letting it melt all over me. When it was gone, I dried out. Then I pulled over, got another bag and started again. It's the only way I made it through that heat.

We got home with no incidents. The bikes did great. Here's what we covered:

It was incredible, the trip of a lifetime.