Some people said the 2016 CVO Road Glide was too much already. The paint was too in your face. The motor was too temptingly powerful. The fairing lines were too seductive. To turn one into a custom CVO road glide might create a machine that was actually painful to look at and drive mortals to unprecedented levels of covetousness.

Who knows if that was what Scott Tatum set out to do. We suspect it wasn't completely unintentional. But it happened, and our service department is partly at fault, so we figure we might as well spill the details. 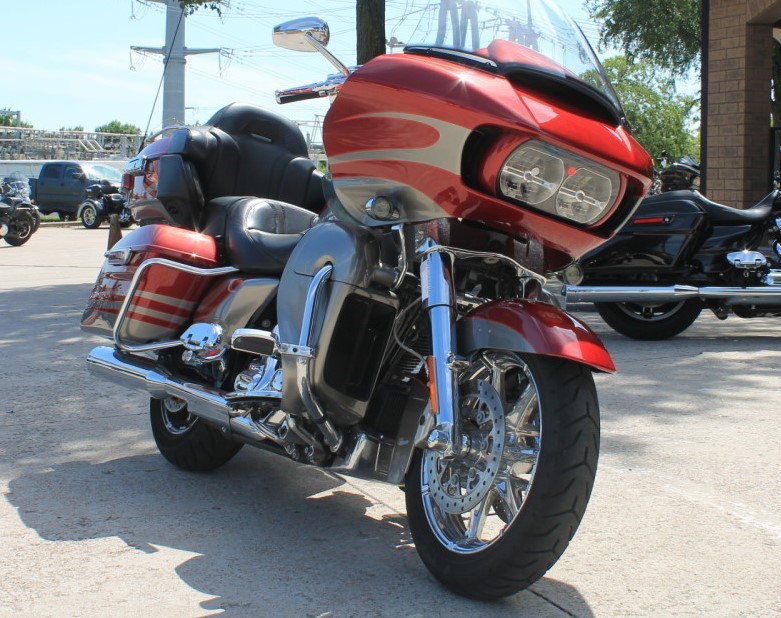 It became a stunning example of what a custom CVO Road Glide could be, but it wasn't Scott's first Harley®. He was deeply familiar with the brand, having previously owned a Road Glide, a Street Glide and two Ultra Classics. In a recent interview, we asked what made him choose this particular CVO as his canvas. Turns out he started with two of them.

"My wife picked my and her CVOs. They were identical when we bought them. She thought it was really cool that they looked identical." Scott didn't share her views, confiding that "men don't think wearing the same shirts and underwear as your wife" is such a nifty thing.

They weren't twinsies for long. Scott had an "incident" while riding, and his bike needed repairs. "I thought, I didn't want to put it back like it was," he said. "I was going to make it into something special."

There are an endless number of ways to turn a factory bike into a custom Harley-Davidson®. The process is always highly personal and unique, but there's one thing we hear in some variation from everyone who comes in the Dallas H-D® service department and talks with our customization experts.

At least part of the reason for starting the process is they don't want a bike that looks like anyone else's. They love what they have to begin with, but beneath the surface, they see a machine in the process of becoming something even greater. The factory shell is just a chrysalis. Unlocking the bike's full potential takes imagination, determination and financial commitment, but the difficulty level is irrelevant.

"It was a long, drawn-out process," Scott said about creating his custom CVO Road Glide. "I looked at hundreds of bikes. I sat down with Jesse - he was one of Dallas Harley-Davidson's lead mechanics. He and I had become good friends over the years, and we had quite a few conversations. I came up with a paint scheme, he came up with the black and chrome combo thing that we did."

Then, all of us experienced a terrible loss when Jesse died. Scott put his bike on hold for a while, and we all grieved. Eventually, he decided to move forward working with DA and Michael, who helped him continue in the intended direction. 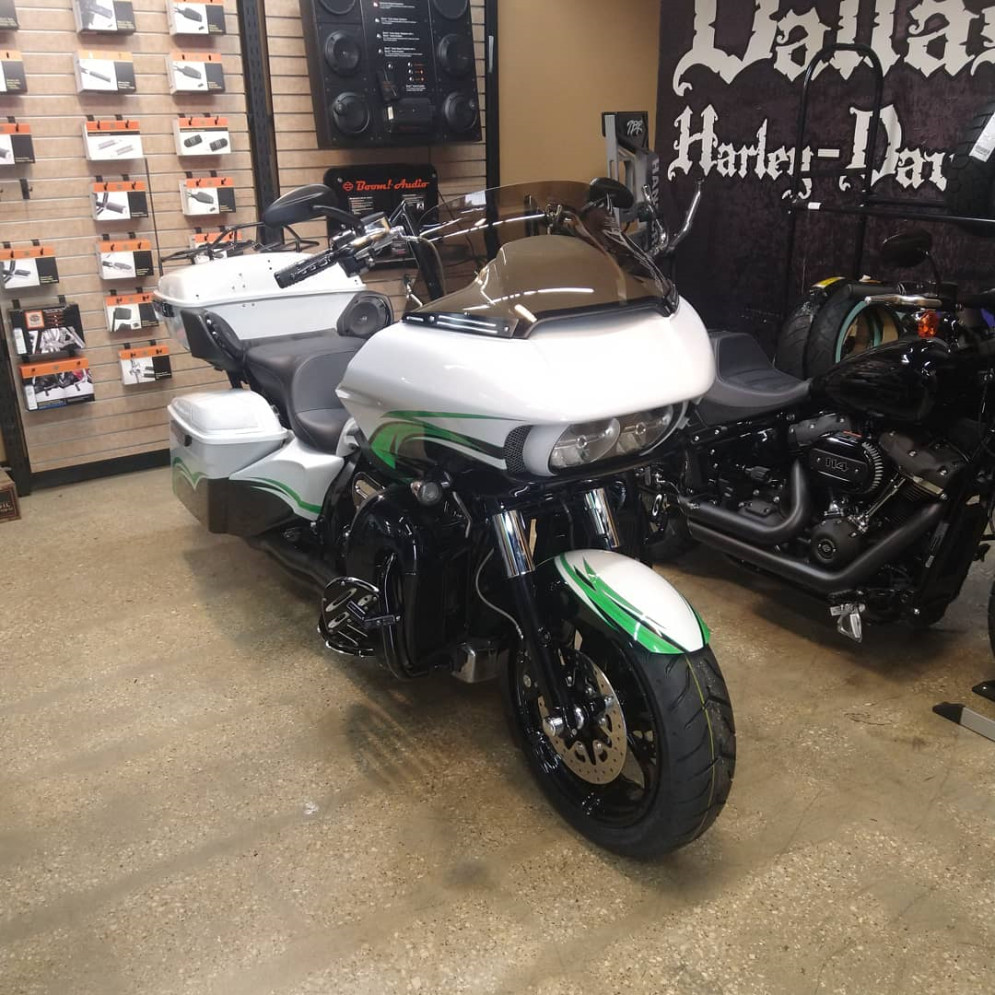 To transform this 2016 Harley® into a custom CVO Road Glide, here's a list of some of the changes our service department made:

Customization usually focuses on making changes that impact comfort, looks and performance. Scott's CVO already had a 110 Screamin' Eagle, so he didn't need to do anything in terms of performance upgrades. He says the air ride suspension made the biggest difference in terms of comfort, "made it ride like a freakin' Cadillac."

In terms of looks, he said several upgrades made a huge difference, particularly the stretch bags, apes, back side covers and the paint job. "I didn't want to do normal," he said. "That's why we did what we did with the black/chrome/black/chrome." 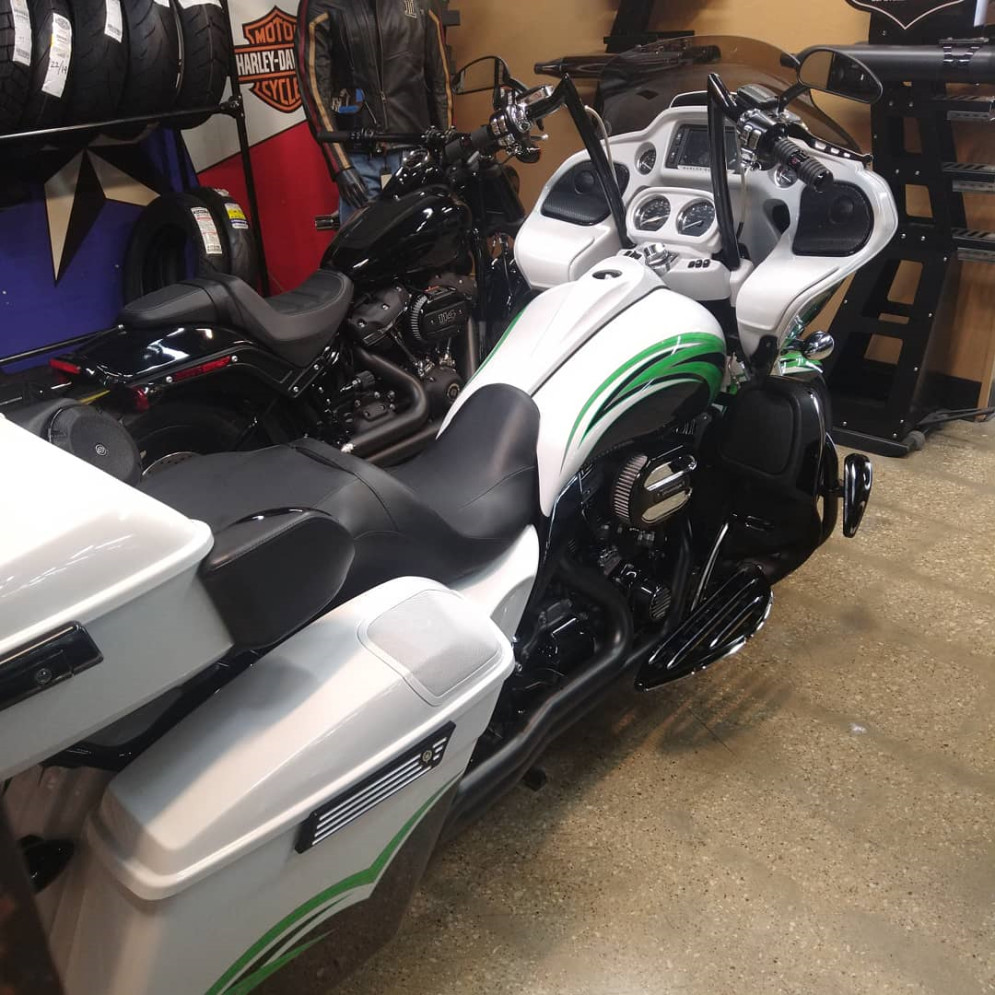 At Dallas Harley-Davidson®, we've been privileged to know Scott for a lot of years. He's been buying bikes and bringing them in for service at our Garland Harley dealership for more than 12 years. Still, when people trust us with their bikes, we know it's nerve-wracking, almost like trusting someone to perform surgery on a family member.

"It's nerve-wracking. A lot of thought goes into the process," he says when he remembers what he went through creating his custom CVO Road Glide. "You don't have your bike, and you wonder if the decisions you made were the right decisions."

"And when you get what you want, this relief comes over you. The hairs on your arm stand up. You get goosebumps."

Get Your Own Custom CVO Road Glide

If looking drove you to wanting, you can't have that bike, but you can get your own. Bring yours by the service department or come to the dealership and pick one out, we'll help make it happen. Here are the custom builds already in inventory.