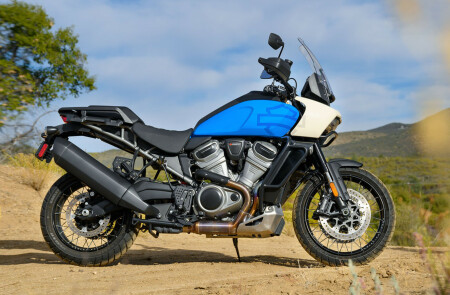 What do people who know Harley think about the all terrain Pan America? Dallas Harley-Davidson’s Lance Orso and a group of friends rode through the Mojave desert last summer, and he summarized it this way. “The 2021 PanAmerica is a first for the Harley-Davidson® brand and they 100% outdid themselves. If you get the chance to take this bike for a spin do it !! Trust us you will have one In your garage ASAP.”

Who is Lance Orso?

Lance’s dad bought him a dirt bike when he was six, and he was hooked on two wheeled vehicles from the very beginning. He grew up racing and went to work in the motorcycle industry as soon as he was able at 19. Before long he had the opportunity to move to Dallas and work for Dallas Harley-Davidson®. He’s passionate about the brand because it’s the “king of kings” for its longevity, recognizability and quality. When he’s off work, his free time still revolves around life on two wheels.

Lance and his group started his epic Mojave adventure by taking 58 out of California City and cutting through on Bodfish Road. The road has as many or more corners as the Tail of the Dragon and curves through beautiful scenery, and he described it as an “absolute blast.”

One fact that stood out about riding Pan America through such winding terrain is that they were riding on knobby tires, and the bike performed flawlessly. They stayed in sport mode and had no issues with skidding or sliding, which was impressive in terms of handling on knobbys.

After Bodfish Road the group pulled over and switched up modes. Lance pointed out that it’s simple to change modes on the fly, toggling between sport, terrain, road, and offroad. They adjusted for the next leg of the journey and rode down the mountainside to Lake Isabella for a lunch stop.

The road was less winding, but the scenery was still just as stunning. “That was dope,” Lance said. “That was probably one of the coolest sceneries that we saw on that trip. You’re just coming out of nowhere and then it opened up like trees all around you and then boom [the lake] was right there.” After lunch they headed around Lake Isabella to Chimney Peak to really put their bikes to an off-road test.

The group climbed again to about 7800 feet and started on a fairly tame and level dirt road. Off-Road Plus is the only only setting for which you have to bring the bike to a complete stop before switching over. When you’re in Off-Road Plus, traction control is off so you can get as rowdy as you want. One thing to remember though, is that if you stop and turn your bike off mid-trip, when you start again your Pan America will be in Off-Road. You’ll have to switch it back to Off-Road Plus if that’s the way you want to continue riding.

Some of the road turned to deep sand, but as soon as they changed modes it leveled off and after that they were just “letting the big dog eat.” With 150 horses and 100 foot-pounds of torque, the bikes had more than enough for everything they threw at it. They rode to the top of the mountain and back down the other side, then took the highway 30 miles back to base camp. During the course of the trip Lance says they did a lot of corner drills, rode a sand pit, hit a moto track and more.

Where to Buy Pan America Near Dallas

Pan America is immensely popular, and if you’ve been looking for one you know it can be hard to get your hands on one. Most of the time they’re sold before they get to the dealership. Get your name on one by pre-ordering Pan America here.