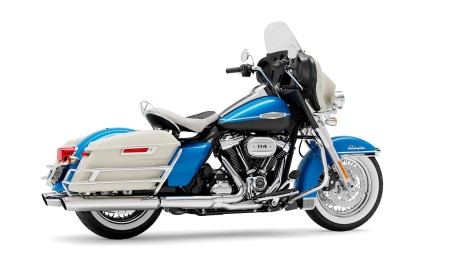 Mirriam Webster says an icon is “a person or thing widely admired especially for having great influence or significance in a particular sphere.” In general, Harley-Davidson® motorcycles are described as iconic. But over the years, there are a few that have become embedded into the American heart, soul and subconscious. The manufacturer is offering a limited collection to celebrate the best of the best.

Who Decides What Becomes an Icon?

Other online sources say an icon is a symbol or representative of a thing, the embodiment of an ideal and other definitions that aren’t really easy to wrap your brain around. That makes you wonder, who decides whether a person or thing is iconic? It can’t just be something good. You might have loved the music by tons of artists you heard when you were in high school, but not all of them were iconic. Models and celebrities wear expensive clothing by expensive designers all the time, but not all of them become fashion icons.

The Harley-Davidson Icons collection was drawn from the manufacturer’s most recognizable and sought-after motorcycles. The bikes have the latest technology so they deliver top-of-the-line performance and comfort, but they also appeal to the nostalgic soul with signature colors, designs and parts. Each model is available in very limited quantities, with each individually numbered. Harley® will only release two or fewer bikes from the Icons Collection annually.

Marlon Brando was a Harley-Davidson enthusiast with a personal 1969 Electra Glide he bought from a Harley-Davidson dealership in Los Angeles. When it went to auction the catalog said Brando rode the motorcycle through the Southwest and through New York City, often taking early morning or late night rides to clear his head. The bike sold to a private collector at Julien’s Gallery for $220,000.

Brando wasn’t the only one to embrace life on two wheels with an Electra-glide, it was popular across the nation for a number of reasons. H-D® equipped the bike with electric start in 1965, and the following year gave it the new “Shovelhead” engine. Electra-Glide was a distance tourer, but it was also fast, and its looks turned heads. It was the first Harley® with a batwing fairing.

The 2021 Electra Glide Revival is “a modern reproduction of the 1969 classic.” Lucky buyers get the fender to fender nostalgic spirit that first made this bike an icon, perfectly paired with modern technology that was decades from being invented when the first bikes debuted. Those technologies include:

We know about the 2021 Electra Glide Revival, but what comes next? Jochen Zeitz, chairman, president and CEO of Harley-Davidson hinted not all the models to come in the next few years will be based on retro-classics from the past. “With The Hardwire,” he said, “we made a commitment to introduce a series of motorcycles that align with our strategy to increase desirability and to drive the legacy of Harley-Davidson. With that in mind, I am proud to introduce our new limited production Icons Collection, a series of extraordinary adaptations of production motorcycles which look to our storied past and bright future.” In other words, future bikes will either revisit classic themes or explore what may be to come.

Each motorcycle will have a single production run, and purchasers will receive a certificate of authenticity.

How to Know What's Coming Next

There are two ways you can stay in the loop on all things Harley. First, make sure you're signed up for our email newsletter. You'll find out about upcoming events, promotions and motorcycle offerings. Second, follow us on Facebook.