Creating a custom motorcycle is what makes it yours. It makes your bike stand out and expresses your personal style. It also allows your Harley® to achieve its full potential as it becomes even more visually appealing, more comfortable, more powerful than it was when it left the factory.

Some people are intimidated by the process of creating a custom Harley-Davidson®. There are so many options, they say, it can be hard to know where to start. It’s time-consuming and takes money.

That’s definitely not the case with Dallas Harley-Davidson® customer Warren Atwater. He bought his 2017 Street Glide Special new and started making modifications, and he just never stopped. We caught up with him recently to recap just some of the motorcycle customization choices he’s made.

Warren’s Street Glide Special started life with a 107 engine, and when he bought it from another dealership, right away he wanted to upgrade to a bigger motor.

“They said I couldn’t do it,” he said, “So I looked for someone who would, and that’s how I ended up at Dallas Harley-Davidson®, and I’ve been there ever since.”

“I wanted a 117 stage four, so that’s what they gave me. Since then I’ve gone up to a 128 stage four. They actually built the motor and everything and put a stage four in it. I took it over to Black Gold to get it Dinod. After that we decided to put in the 131 motor, so they built that. That’s what I have in it now.”

The motor upgrades were huge, but that’s not all Warren had Dallas Harley-Davidson® change. The modifications and upgrades are so extensive he struggled to list them all.

At this point, the only thing he hasn’t changed is the gas tank. “I’ve done so much to that bike,” Warren said, “It’s hard even to explain it all. Every bike I’ve had I always wanted to do whatever I could to make it better. This week I’m taking it to Black Gold and we’re going to see what kind of horsepower it puts out. We’re thinking around 142 horse.”

Built to Be Ridden

Atwater’s bike is a showpiece, but it isn’t just for looking at. He has ridden it to Sturgis and back every year since he bought it. A few years ago when Dallas Harley-Davidson® hosted the Milemaster challenge, Warren won the challenge, riding 20,000 miles in 40 days. The bike currently has about 45,000 miles on it, and he has enjoyed putting on every one.

“The deal is, it takes time and money to change stuff,” Warren says. “You have to have patience to be able to do that. If you want something, sometimes it takes a while with this pandemic. Like the radio took two months to get it, but the service department got it, and got it installed.”

He says when people first see his custom Street Glide, they take a lot of pictures and ask a lot of questions, things like

He tells them every year when he rides to Sturgis, he puts between 4,000 and 6,000 miles on it, and he's never had any problems.

On Working With Dallas Harley-Davidson®

“Everybody up there is awesome,” Warren says. “The people at the front, all the mechanics, I’ve had no issues to even bring up. Any problems they have been able to solve for me from parts to service to sales.

“DA has been really helpful with everything. Almost all the parts I got with AJ in the parts department. AJ and DA and everybody at the Harley shop over there have been extremely helpful. They never say no.”

“Plus, I have the service plan on it, so I have them change the oil. I’ve always used synthetic oil, I think that’s why I never have problems with the motor…and having good mechanics that work on it.”

When asked what’s next in terms of motorcycle upgrades, he laughed. “I don’t know of anything to be honest with you. AJ has been looking to see what we can add to it, but we can’t really find anything right now.” 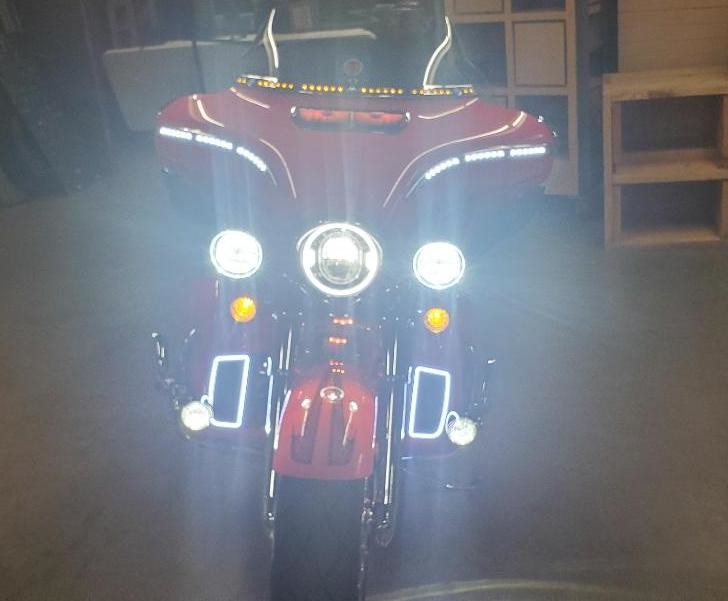 Get Your Own Custom Motorcycle

We thrive on helping customers accomplish pretty much anything they can dream up when it comes to making a custom motorcycle. Check out the custom builds we have ready to go or send us a message to let us know what you'd like to do, we'll be in touch.