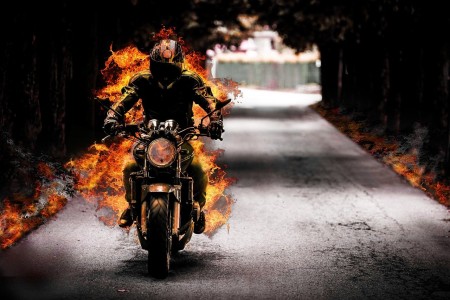 With the approach of All Hallow’s Eve, you’re bound to see an increase in black cats, witch hats, cobweb-draped front porches and carved pumpkins. We all have something a little ghoulish that takes an interest in what might lie outside the natural, observable world. Bikers in general are a colorful group that sometimes tends toward superstition. We’ve come up with our own lore to control the open road’s unpredictability and keep the shiny side up.

Trap Evil With a Bell

New riders often come in our Garland TX Harley® shop and express curiosity about our ever-changing selection of small guardian bells. They’re enchanting, but unless you know what they are, they may seem a strange item to find at a Dallas motorcycle dealership. Next time you’re in, pick one up to gift to a rider you know. You’ll be surprised by their gratitude over such a small gift.

Superstition says evil spirits or gremlins are out there interested in doing the rider (and everyone else) harm. A guardian bell captures the attention of mischievous gremlins and they become trapped inside. The continuous ringing eventually drives them insane, and they can’t do anyone harm ever again.

You can’t buy a bell for yourself, though, you must receive it as a gift. Even if you don’t believe in gremlins, bells are a nice way to say you care about another rider and express your hope they stay safe.

Don’t Ride With the Back Pegs Down

If you don’t have a passenger, superstition says put your passenger pegs up. It’s a little like the idea of the gremlins. Long-time riders with long gray beards will sometimes tell you that’s just asking for the type of otherworldly passenger you don’t want to have tagging along.

The only exception is if you’re riding in a funeral procession for a fellow biker. In that case, the tradition is to ride with your back pegs down so he or she can come along for one last ride.

For a long time, riders considered green a terrible color for motorcycles. If you rode a green bike, it was believed, you were more likely to crash and die. Since nobody likes to do either of those things, motorcycle makers found green was an extremely unpopular color.

The whole thing might have started because of World War II. Soldiers rode motorcycles painted green to carry messages or get quickly from place to place. The color identified them as military and made them a target for enemy rifles in the area. In their case, green bikes did make it more likely they could experience bad luck.

Then, after the war many of those same bikes were shipped home and sold as surplus. They had been ridden hard over tough terrain, shot at and sometimes neglected. They weren’t in the best shape, so they were more likely to experience mechanical failure. That and worn tires and war-fatigued brakes also made it more likely riders could be involved in an accident.

Another superstition holds that if your helmet hits the ground, your head will soon follow. There’s no factual basis for this one, but there is one important thing to point out. If you drop your helmet and damage it, it might not offer the protection you need if something happens. If you’ve dropped yours bring it by and let us look at it. We can evaluate it for you and, if needed, help you find a replacement.

Stopping to Help is Good Karma

Bikers do have an invisible connection to and concern for each other, whether they’re superstitious or not. If you’ve ever been pulled over with mechanical problems and another biker rode by, he or she probably stopped to check on you because that’s just what we do.

There’s a superstition connected to that too. Some riders think if you stop to help another biker in need, if you need help later, someone will stop for you too. If you ride by and leave them stranded, superstition says karma will eventually make sure you experience the same.

If you believe in ghosts, you’d best not buy a secondhand motorcycle that belonged to someone who died. Superstition says if his ghost is still wandering this plane and he sees you on his old ride, he’ll knock you right off of it, and his spirit will cling to it ever after.

Come swap superstitions at our upcoming Skulloween Street Bob Giveaway on October 31 from 10 a.m. to 5 p.m. We’ll have live music, a food truck, an adult costume contest and loads more fun. Plus, you don’t want to miss our Street Bob giveaway at 2 p.m.