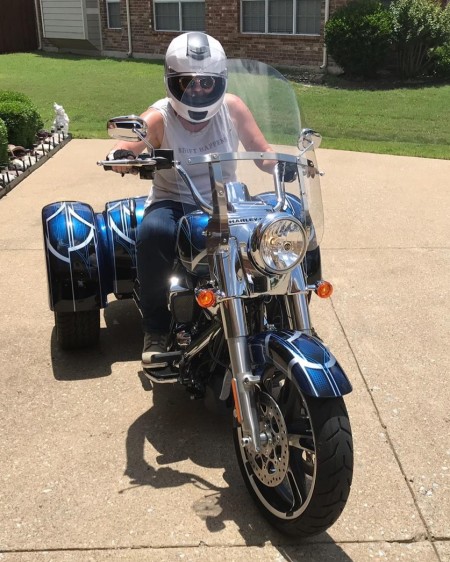 If you’ve shopped Motorclothes® at Dallas Harley-Davidson® in Garland any time in the last five years, you may have met Margit, a laughing, energetic H-D® enthusiast from Germany. She’s passionate about Harley and rides her Freewheeler® to work almost every day.

If you met her, you know she’s knowledgeable about everything in the store, but she was probably too busy helping you find what you were looking for to talk much about herself. But her story is inspiring, so we recently caught up with her for an interview.

How did you go from Germany to America?

I got married to an American 30 years ago, on the 25th of June, 1989. We lived in Michigan for four years, then we went back to Germany because my parents were sick. We lived there and took care of my parents for 21 years. I was a firefighter in Germany for 15 years.

Where did you learn English?

In Germany, in school everyone has to have a second language, so I learned to speak English there. Then when we lived in Michigan I learned from my mother-in-law and from TV. So I got more comfortable with it.

So how did you become a firefighter when you moved back to Germany?

I worked at the Town Hall, and my boss the Mayor asked, “Why don’t you want to be a firefighter?” I said, “Because I am not a man!”

Well, I became a volunteer firefighter, and they have to do everything the regular firefighters do. At first I was just a normal volunteer. Then I started making all the casts for the machinery, for the big firefighter trucks. Then I was a group leader. I made driver and drove the big fire engine. Then I was second to the boss.

I had no problems. I was young then, I was 30 years old. But whenever the pager beeps, you have to go, 24 hours a day. Even if it’s night it doesn’t matter.

The hardest part is when you have to cut people out of a car. If somebody doesn’t scream anymore, that’s not good. If they scream, you can still help them. When it’s too late it’s hard, but you have to stand still and straight and not let the others know it bothers you, because there are others who still need to be helped. But it wasn’t all like that, there were fun times too.

You know what the most fun part was about everything? They were all men and I was a woman, and they had to do what I said because I was their boss.

How did the men respond to you as the only woman firefighter?

The young ones were okay with it. The older ones sometimes weren’t. I remember the very first time we had to go out I told them to do something and they just walked away. I said, “Come here. You need to do what I say. If you don’t, I don’t need you, go home.” And that was the last time they walked away. But for a woman as boss, you have to stay on your men all the time.

How did you end up back in the United States?

My parents died and a week later I asked my husband if we could move back. “Not to Michigan,” I said. “No more snow. I want to go to Texas.” In one night we had more than three feet of snow all at once, and I wanted to go somewhere warm.

Then my husband looked on the Internet. He found Plano is one of the safest cities in the U.S. We found a house in Murchison and we’ve been back five years.

What was it like going from being a firefighter to working in retail at Dallas H-D®?

Sometimes I miss being a firefighter, but I love the Harley store. It’s just like a big family. Everybody looks after everyone else. I can talk to my boss Tiffany, I can even talk to Paul Langford.

It wasn’t hard to transition because everyone is so helpful. If I can’t understand a word I just ask. It’s hard work, because you want to always satisfy the customer, but everyone is so friendly.

Did you always ride motorcycles?

No! My husband bought a Harley there. Then he bought me one. First I rode a 750, but I got rear-ended and had to have surgery on my shoulder. Then I got a Freewheeler. My husband tried to buy me a Spyder but I told him, “No, I want a Harley.”

I like to ride far. I like to ride for hours. I can just ride forever, it doesn’t bother me. Freewheeler® doesn’t have the name for nothing – there’s no fairing, nothing in front of you, you just have your windshield so you just ride. You, the wind and the road and you’re free.

In February this year we did the Iron Butt. Then in May, I survived Highway 50, the loneliest road in America. Then also in May, we did the Bun Burner, 1532 miles in 24 hours. When I got my Freewheeler® it had seven miles. Now it has 12,000.

When she's not riding the open road, Margit works two days a week at Dallas Harley-Davidson®. She often goes in early to see what's new, and she's always one of the most knowledgeable in her department. Look for her in Motorclothes®.