IF FAT BOY® COULD TALK

Fat Boy® just makes people stop and stare. No matter how many times you've seen this bike, how it's customized or what year it rolled off the factory line it's like a punch to the gut. A very sexy punch to the gut.

The steamroller stance, the wide front tire, the sleek curves and satin chrome all scream "look at me." The throaty rumble says, "take me for a ride, I'll blow your mind." The lightweight Softail design responds to the gentlest touch and delivers an experience like nothing you've ever felt before.

This bike has been thrilling motorcycle enthusiasts for more than 25 years. It debuted in 1990, when stylists Willie G. Davidson and Louie Netz designed it with front and rear solid-cast disc wheels, shotgun exhausts and flared fenders.

Willie favored a handmade, nostalgic look, so he used monochromatic silver paint and powder-coated the frame silver to match. The logo and stitching emphasize careful craftsmanship and patriotism.

Before Harley-Davidson® started selling Fat Boy® to the public, Willie G. tested it himself on numerous occasions. He rode a Fat Boy® prototype to Daytona in 1988 and repeated the trip in 1989. Over the years, Harley® hasn't made many modifications to the original design. In 2010 they introduced the darker, leaner Fat Boy Lo with an even more low-slung stance.

Fat Boy® comes with a Milwaukee-Eight® Big Twin engine available in both 107 and 114 displacements. From the factory the 2019 model gets signature LED forward lighting. Fat Boy® has the classic look you see on all Softail® frames, but a recent redesign makes it lighter and stiffer than the original for improved responsiveness. Owners rave about its sophisticated front suspension technology and adjustable mono-shock rear suspension.

How Much Does a Harley Fat Boy Cost in Dallas? 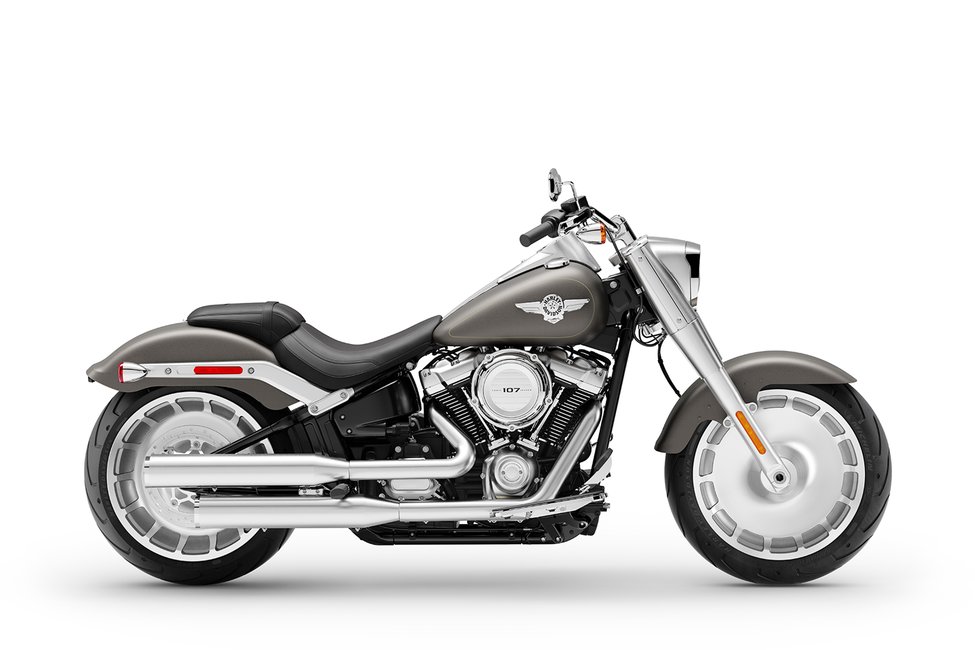 The wheels are integral to the Fat Boy® look. Front and rear wheels are 18 inches in diameter of Lakester cast aluminum. The tank holds five gallons even, and the EPA estimated fuel economy is 47 mpg, so you could go up to 235 miles between fill-ups.

As far as lights, indicators and gauges go, here's what you get:

When it comes to creating a custom motorcycle, Harley has designed as many options for Fat Boy as they have for other bikes, which means the hardest part will be choosing between them. The only question you'll have to answer is, how extra are you?

FAT BOY® IN THE MOVIES

Okay, okay...let's look at some badass bikes. Fat Boy® has the muscular look film makers love, so it has stolen the show in major motion pictures and popular TV series. Here are just a few of the most noteworthy:

So...Arnold Schwarzenegger walks into a bar (naked). He finds the roughest looking biker in the joint and says, "I need your clothes, your boots and your motorcycle." A short time later he walks out fully clad and roars off on this Fat Boy to George Thorogood's "Bad to the Bone." We included the YouTube link in the photo so you can watch it for yourself. Go have fun, then click the back button to see what's next.

Fat Boy tends to play a role in movies with names like Death Riders, Criminal Affairs, Never Talk to Strangers and Misadventures. The bike has also starred in TV series like CSI: Miami, The Sopranos and Sons of Anarchy. Every time you see it, the bike makes an entrance and leaves you wanting more.

Dallas Harley-Davidson® is your top choice when you're ready to buy a used Fat Boy® near Dallas. At the time this article is being written, we have some impressive choices in our inventory. Here are a few examples. Click on the photos for more information.

This popular bike was built for riding the Dallas streets. See more on new 2019 Harley-Davidson Fat Boy Motorcycles, 2018 Fat Boy or pre-owned Harleys for sale in DFW on our website.